Present Versus Past and Everything Inbetween

The following timeline visualization compares photographs taken in the 50's by my Grandfather, Selepa, to the present moment.

The photos are ordered based on how long things have existed. The visualization documents how things have changed over the years.

Change is the Only Constant

When I was a child, my father took family photographs using slide film, and once a year my family would gather to look at the photographs. Slide film was a precious commodity. Today we take hundreds if not thousands of photos using camera phones, our only limitation being the size of our phone’s memory. With more memory comes trade offs. We are now more likely to forget the moments we photograph because we trust the technology to do the remembering for us.

In Believing is Seeing, Errol Morris writes that photographs trap us in a single moment in time. Morris believes one way to understand a photograph is to revisit the place it documents to see how things have changed. In 1954, and 1959, my Grandfather, Selepa, left India to travel the world. The following timeline visualization compares photographs taken by Selepa in the 50's with photographs taken by present-day Instagram users. The photographs are a small peephole into two different moments in time.

The Worker and Kolkhoz Woman sculpture was created in 1937 by Vera Mukhina. Long a symbol of the Soviet epoch, the sculpture was removed in 2003 for restoration. Upon being returned in November of 2009, the height of the pedestal was increased from 78 feet to a lofty 200 feet. 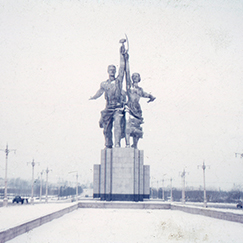 My Grandfather visited Liberty Island in 1954, nineteen years before the construction of the World Trade Center. One of the first stops my parents made upon immigrating to the US in 1979 was to Liberty Island. Thirty-six years later, the New York skyline is dramatically different, the Freedom Tower replacing the World Trade Center, which was destroyed during the September 11 attacks. 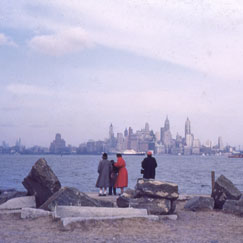 Near the banks of the Hooghly River sits Kali Temple, founded by Rani Rashomoni to house the Goddess Kali. Rani was a philanthropist who often clashed with the British in India. Kolkata was the capital of British held territories until 1911, and the center of the Indian independence movement. Today, tourists can still visit the temple, much like my father's family did in 1956. 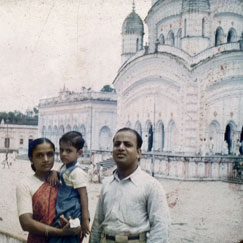 1957 My father's family at Kali Temple

In 1837, Queen Victoria moved into Buckingham Palace establishing it as the official residence of the British monarch. When my Grandfather visited in 1959, Queen Elizabeth II's coronation had occured six years prior. Sentries guarded the Palace outside the fence until an altercation with a tourist the year my Grandfather visited in 1959 led to the sentries being moved inside. 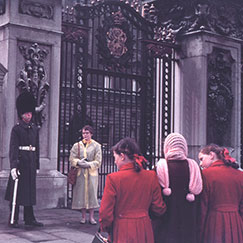 1959 Queen's guard and onlookers in front of Buckingham Palace

The Roman Forum was a plaza at the center of the city of Rome and public life. It is regarded as one of the most celebrated meeting places in the world. It was the stage of Marc Antony's funeral oration for Caeser immortalized by Shakespeare in his play Julius Ceasar with the line "Friends, Romans, countrymen, lend me your ears." 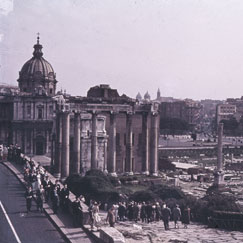 Niagara Falls: Border of US and Canada

The Niagara Falls formed at the end of the last ice age with water from the newly formed Great Lakes. The falls have moved back 7.5 miles over the past 12,500 years. While there are many taller waterfalls around the world, Niagara Falls are known for their width and massive flow rate. 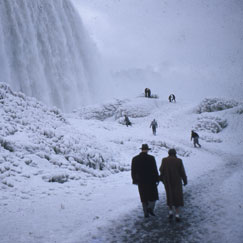